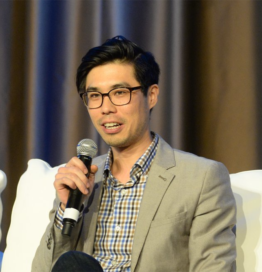 Aaron Tanaka is a Boston-based community organizer, economic developer, philanthropic advisor, and impact investor. As the executive director of the Center for Economic Democracy, Tanaka stewards funding and capacity building programs to social movement collaboratives that advance alternatives to capitalist economics in the US. CED is best known for its role in incubating the Boston Ujima Project, a local model for the democratization of finance capital.

Before founding CED, Tanaka served as the startup manager for the Boston Impact Initiative, Boston’s first place based impact fund investing with a racial justice mission. Until 2012, he was founding executive director of the Boston Workers Alliance, a grassroots organization nationally regarded for its trailblazing “Ban the Box” policy victory in 2010.

Tanaka is a former fellow with Common Future, Echoing Green, Green For All, and Tufts Dept. of Urban Planning, and has served on multiple boards including the Neighborhood Funders Group, MIT Co-Lab and New Economy Coalition. He holds a masters of science in community economic development from Southern New Hampshire University and a bachelors with honors from Harvard University.