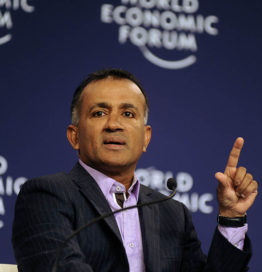 Chandran Nair grew up in postcolonial Malaysia, amid the nation’s diverse racial and cultural composition. After attending university in the UK, he moved to southern Africa to do volunteer work on development issues. It was during this time that he became very interested in economic development, its relationship with geopolitics, and the nature of institutionalized racism.

This belief prompted him to start a pan-Asian think tank in 2006 called the Global Institute for Tomorrow (GIFT), which promotes a deeper understanding of the shift of influence from the West to Asia and focuses on what the needs of the post-Western world will be.

Nair is a member of WEF’s Global Agenda Council on Governance for Sustainability and Experts Forum and sits on the Executive Committee of the Club of Rome.

Nair has served as adjunct professor at the Hong Kong University of Science and Technology and the Lee Kuan Yew School of Public Policy in Singapore.