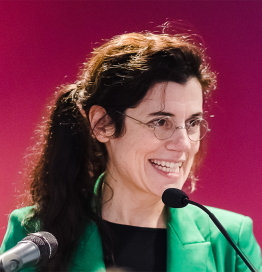 Isabelle Ferreras is a senior research associate of the CLJE. She was trained as a sociologist, receiving her doctorate of philosophy from Louvain in 2004, and as a political scientist, receiving her master’s from M.I.T in 2004. She is also an alumnus of the Trade Union Program at Harvard University, Class of 2005. She is a senior tenured fellow of the Belgian National Science Foundation, full professor at the University of Louvain, where she is a permanent researcher at the Centre for interdisciplinary research Democracy, Institutions, Subjectivity (CriDIS), and a research associate of the Labor and Worklife Program at Harvard Law School since 2004. Ferreras was elected member of the Royal Academy of Sciences and Arts of Belgium in 2017. She served as its president, and director of its Technology and Society Class during the years 2021 and 2022. In 2020, she co-launched the #DemocratizingWork Global Initiative, and is co-leading its development.

Ferreras’ research agenda has developed toward an exploration of firms as –internally- political entities from both a descriptive and normative perspective. At the micro-level, her focus is on understanding the logic of work in the context of the Western service-based economy, for which she has been advancing a critical ‘political sociology of work’. At the institutional level, she has developed a companion ‘political theory of the firm’ that seeks to grasp firms as political entities, and to explore its implications at both the levels of efficiency – including in the sense of meeting planetary boundaries, and of normative – democratic – accountability. The role played by labor rights in such a context constitutes a key research focus for Ferreras. She has pioneered the idea of finding inspiration in the history of democratic revolutions, and transitions, to find appropriate ways to democratize corporations, advancing the proposal of “Economic Bicameralism,” which recognizes a collective veto right for workers’ representatives, at the strategic level of firm decision-making. Ferreras’ research has led her to explore what she calls the ‘capitalism/democracy contradiction’; that is, the potential problems that arise when we organize our economy along capitalist lines while nurturing the democratic political ideal of equality for all. As a result, she has developed a key interest into the issue of the sustainability of our model of economic development, understood in its double dimension: social and environmental. Her most recent book, Democratize Work: The Case for Reorganizing the Economy, was published by The University of Chicago Press in 2022.