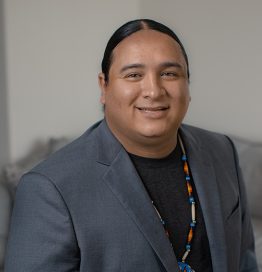 Nick Tilsen is a citizen of the Oglala Lakota Nation, father of four, and founder of the  NDN Collective. Tilsen has over 18 years of experience in working with nonprofits and tribal nations on projects that have a social mission. Prior to NDN, Tilsen founded and served as the executive director of the Thunder Valley Community Development Corporation for 12 years, working in his home community on the Pine Ridge Indian Reservation to build place-based innovations that have the ability to inform systems change solutions around climate resiliency, sustainable  housing, and equitable community development. Tilsen created the NDN Collective to scale these place-based solutions while building needed philanthropic, social impact investment, capacity, and advocacy infrastructure geared towards building the collective power of Indigenous Peoples. Tilsen has received numerous fellowships and awards from Ashoka, Rockefeller Foundation, Bush Foundation and the Social Impact Award from Claremont-Lincoln University. In 2017 Tilsen received an honorary doctorate degree from Sinte Gleska University. Tilsen continues his community organizing work and sits on the boards of the Indigenous Peoples Power Project, and the Oceti Sakowin Community Academy.