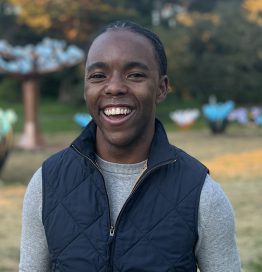 Shawon Jackson (he/him) is the founder and CEO of Vocal Justice, a nonprofit that positions youth who are proximate to injustice as leaders for social change. To date, Vocal Justice has engaged 1500+ Black and Brown middle and high school students across 17 states in their youth leadership development program, which focuses on storytelling for social change. In 2021, Jackson was named an Echoing Green and Camelback Ventures Fellow. Most recently, he was included on the Forbes 30 under 30 Education list for his work with Vocal Justice.

Outside of Vocal Justice, Jackson is an Adjunct Lecturer of strategic communication at Stanford Business School, where he received his master’s of business administration. He also concurrently earned his master’s of public policy from Harvard Kennedy School. Prior to graduate school, Jackson worked with an education nonprofit in the Dominican Republic and then did public and social sector consulting with Deloitte. He completed his undergraduate studies at Princeton, where he majored in public policy and served two terms as student body president. If he’s not working, you’ll likely find Jackson dancing hip-hop, bachata, or merengue.

“The Importance of Organizing Young People”